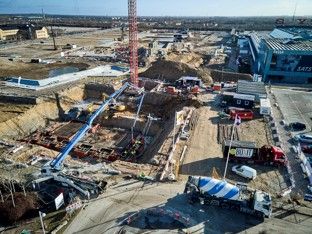 Høje-Taastrup is building a new city hall using recycled materials from the demolished Taastrupgard housing blocks. The foundation of the city hall now exists of 100% recycled concrete aggregate (and new sand), which represents a departure from the ‘linear’ way of building. Conventional construction projects only use demolished concrete as backfill, while new construction is being done with virgin materials.

Høje-Taastrup had decided to build the new city hall in 2016, but it only incorporated circularity in the project when it became involved in CityLoops in December 2019. In January 2019 this led to a meeting with bidders to inform them about the circularity of the project and to let them know that the Municipality had recycled concrete that could be used. Eventually in April 2020 a builder was chosen, with a bid that included a recycled concrete foundation. In March 2021 the recycled concrete was succefully poured in the new city hall foundation.

Høje-Taastrup has identified several key reasons to the success of this project. Firstly, there was good cooperation with the relevant stakeholders across all steps of the value chain and people were willing to try out new things. Furthermore, the demolished materials were available in good time, allowing the planning, recycling and incorporation to align well. In addition, the prevalence of concrete materials made the matching of supply and demand straightforward.

The circular aspect made this a more expensive project than a conventional one would have been. Yet, there was a willingness to invest and the costs were shared between the CityLoops project, the concrete crushing company, the concrete mixing and delivery company, and the builders. Moreover, following the project concrete company UniCon is aiming to use more recycled aggregate in future works. This should make it easier and cheaper to use recycled conrete in the future.

Planning for circularity from the beginning and defining clear and unambigious roles and responsibilities of each actor from the start could lead to even more succesfull circular projects in the future. During the course of the project, the political support for circularity in Høje-Taastrup increased and the city is planning to upscale its ambitions regarding future projects. For example, it is thinking about using recycled concrete furniture and wood panelling in the new city hall.