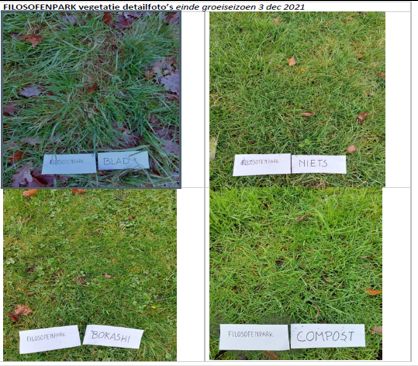 Between December 2020 and March 2021, the city of Apeldoorn produced 2,500 tonnes of bokashi. The bokashi is produced out of leaves collected from three city neighborhoods, within the context of Apeldoorn’s participation in CityLoops where it is working on several demonstration actions aiming to valorise its biowaste.

Bokashi is a soil improver, high in nutrients, with a positive effect on soil quality, moisture management, carbon storage and plant growth. Apeldoorn created it by firstly adding regenerative micro-organisms, rock flor and minerals to the tree leaves collected. The leaf mixture was then placed in a pile, compressed to remove air, covered with agricultural plastics, and stored for 6-10 weeks at a temperature of 20 degree Celsius.

The bokashi was spread out in two different parks of the city, together with compost. In both parks this led to more plants, such as clover and plantain, and greener fields. At the same time, at the end of the growing season bare spots were visible at the places where leaves were not removed.

In 2022 Apeldoorn aims to contnue producing Bokashi, using the same process, only adjusting the way it cleans up its neighborhoods. In the previous two years, the city picked up litter after the collection of leaves. This year, the collection of litter and leaves wiill take place simultaneously with the bokashi production process.